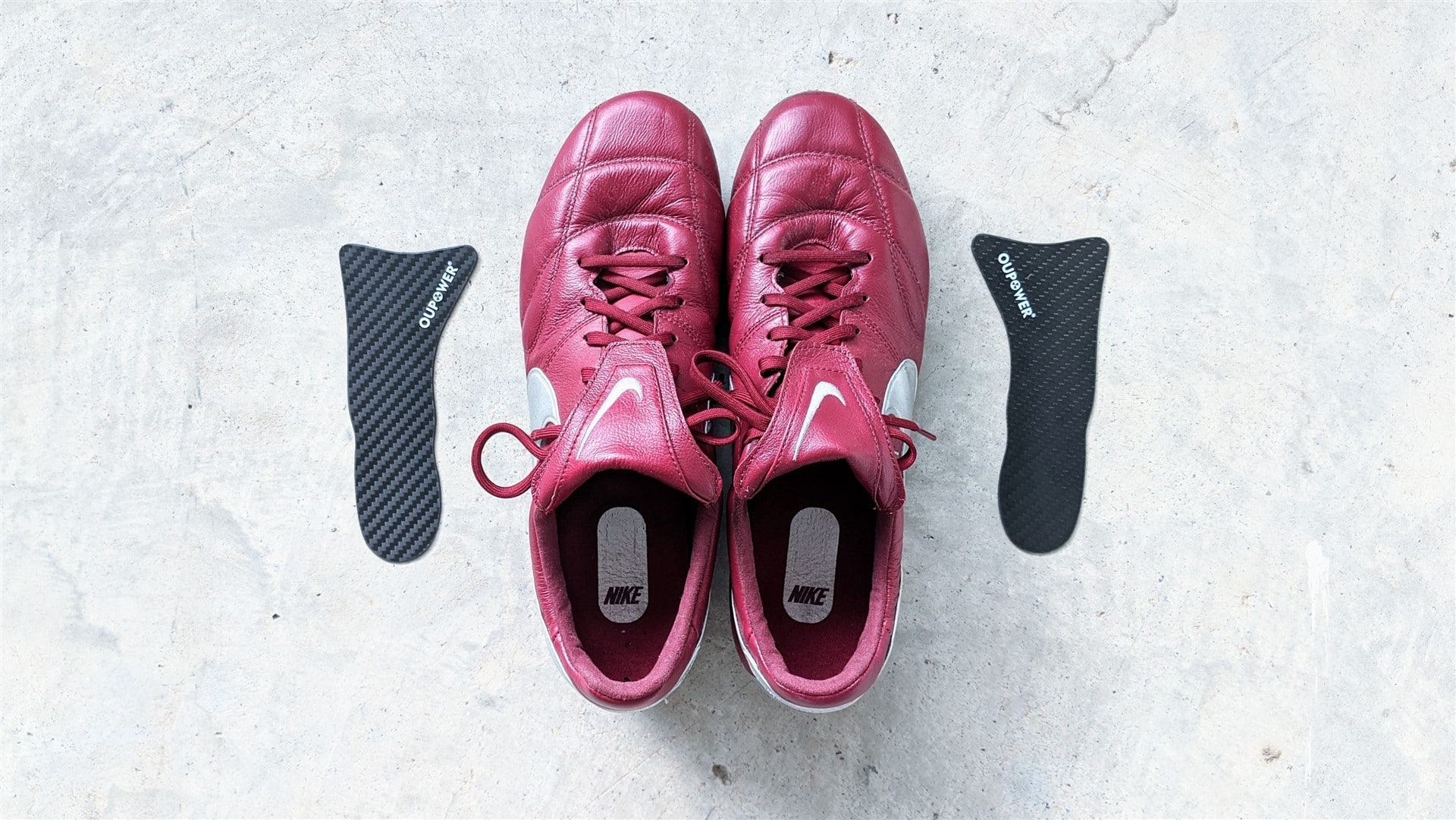 2.5
out of 10
Buy the Oupower Carbon Fiber Midsole
Taobao

An insert that promises you a better response in your midsole.

I’ve always been fascinated by the idea of a more “responsive” soleplate giving you that extra spring in your step. They have been a feature in some running shoes with the inclusion of a carbon fiber plate. The world’s premier marathon runner, Eliud Kipchoge, broke the 2 hour marathon barrier in his Nike’s Next% which also contained a sculpted layer of carbon fiber that aimed to reduce energy loss by helping the running spring forward when the feet flexes with each step.

For football boots, manufacturers have mostly decided to create a denser midsole to provide that stiffness though they don’t always provide the sharp “snapback” effect that carbon fiber provides. Save for a short foray into carbon fiber plates by Nike, the material has hardly made an appearance in football boots. That was until I noticed a low-key trend among professional players – many include a carbon fiber insert that is pasted onto their soleplate to provide them with that very “snapback” effect.

So hence my journey into seeing whether I could get my hands on my own set and see if it made a difference in my performance.

That was what I thought to myself. Could carbon fiber be the next big trend, like grip socks? The answer may well be due to economics. Carbon fiber as a material is very expensive which may explain why Nike only had them in their boots for just over a year before they were discontinued. Their solution to create a denser material in the midsole is more affordable for the masses and it hasn’t caused any problems.

But the recent observation in match-worn player boots with carbon fiber inserts got me thinking that there was a simpler solution for the rest of us. And to my luck, Jayc, our writer and Japanese boot expert found a Chinese site selling them for a mere SG$25 per pair. The Oupower Carbon Fiber Midsole was too good to be true but I just had to test them out.

If there ever was a time I was more underwhelmed by a product, I couldn’t recall such a moment. The Oupower Carbon Fiber Midsole came in a flimsy wooden box that was covered in carbon fiber skin to give it “the look”. Be very gentle with the box because it’s feels like it’s going to come apart any time. The carbon fiber inserts look quite promising until you flip it to see two 3M stickers attached on its back.

The strips do make a good impression of carbon fiber but feel more like reinforced plastic with a carbon fiber paint job.

Putting on the Oupower Carbon Fiber Midsole was a bigger hassle than I expected. What the photos of the players’ boots did not tell you is that the carbon fiber strips used by them are custom built, made to fit the contours of their boots. The Oupowers, however, were straight as an arrow. This meant that having them stick to the base of my boots were a big problem due to the boot’s slightly contoured base. The insert will not conform to the base and neither do the 3M stickers do a good job of sticking well enough to force the strip to bend.

I had to resort to Plan B – sticking the insert to the underside of my insole. This was not the perfect solution though as it caused some separation between the boot’s base and the insole thanks to the rigid insert. With an elevated insole, expect the boot to feel just a little more cramped than usual.

One of my big concerns was the slipping and sliding of the insole as it did not settle onto the boot’s base due to the strip attached. Surprisingly, there was none of that as my insole kept its position as I made my warm up jogs in my boots of choice – the Nike Premier 2.0. I chose the Premier as it’s got a natural flex, it’s one of the least aggressive boots I own and I know the Premier inside out.

The stiffness and tension from my first steps in the boots were quite evident. You could feel the Oupower Carbon Fiber Midsole making sure that my foot didn’t flex too much and sprung it back into place as I walked. If I had to give a number, I would say it added 70% of stiffness as I walked. That number reduced greatly to about 10-15% once I started the game. I know this isn’t the most scientific measurement but hey….

The strip’s impact was not obvious as I sprinted, back pedalled, and pivoted in intense 5-a-side games. I believe its effects were mostly negated due to the strip not being wholly attached to the base of the boot – a big flaw that has to be fixed if you want the full effects of the strip.

A good idea with a flawed execution

In hindsight, I was expecting too much from what is usually a high performance product, priced at only SG$25 that ships from China. For such a product to work optimally, they have to be custom made and built from real carbon fiber. This would cost you a pretty penny.

Off-the-shelf solutions like the Oupower Carbon Fiber Midsole are just doomed to fail because they don’t fit and adhere to most boot surfaces – most of which have the slightest of contours. They do deserve some brownie points for producing a faux carbon fiber material that is genuinely light and relatively strong.

I’ve come to the conclusion that there are no quick solutions to adding such performance in a football boot – a humbling reminder that there are no shortcuts to success, or in this case, more spring in your step.

My advice to you? Spend a bit more time in the gym for that explosive power and spring in your stride. Sometimes, the old ways work best.

Final Thoughts
A good concept but a failed execution.
The Good
Stiff plates
Cheap
The Bad
Poor packaging and presentation
Unable to adhere to most boot surfaces
Doesn't work if not wholly stuck to boot
2.5
out of 10
Buy the Oupower Carbon Fiber Midsole
Taobao