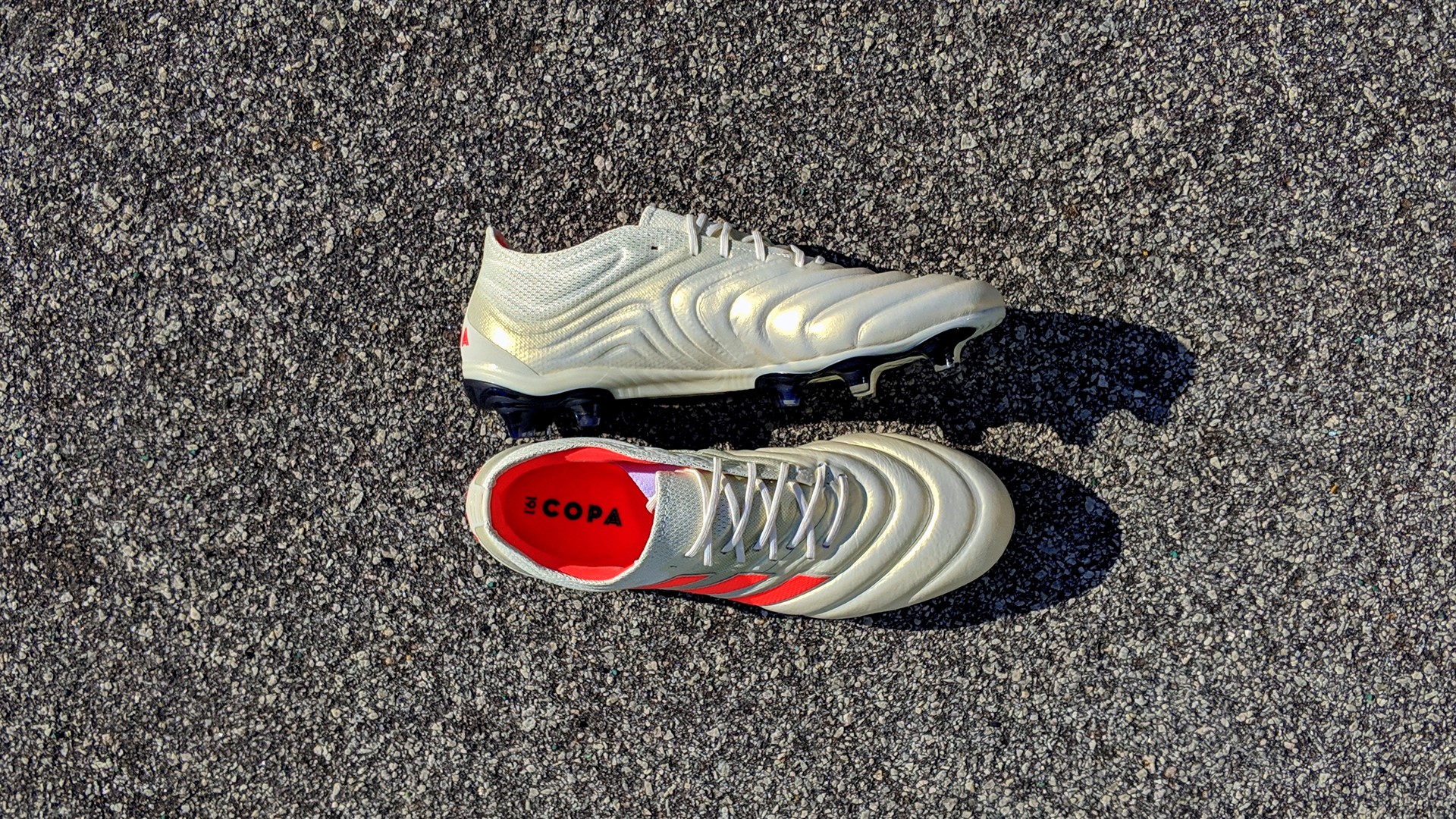 9
out of 10
Check below for the best prices
Prodirect SoccerSoccer.comLovell SoccerUnisport Store

We judge adidas’ return to producing a leather boot.

Editor’s note (Aug 2020): We’ve also done a follow up review of the adidas Copa 19.1 where we’ve tested it further after over 6 months of wear. Check out the “post hype review” here after you’ve read this review.

It wasn’t long ago that adidas had a range of boots to rival Nike’s four silos. Then came the purge a few years back where they cleared out all their silos to focus on just the Ace and X lines. Perished during this period was the leather boot range, the 11 Pro, which had a healthy following including the likes of Toni Kroos who still swears by them today.

Since then, the leather boot silo has been an after thought to the three stripes who look to focus their attention on synthetic and knit based boots while their biggest rival, Nike, dominated the leather boot category with the Nike Tiempo Legend 7.

adidas made a meek attempt of producing their top grade leather boot with the COPA 17.1 and COPA 18.1 but they were not given the same attention to detail with their design or marketing to warrant a spot alongside its illustrious brothers like the X18.1 and the Predator.

Enter the COPA 19.1 and adidas’ glorious return to leather boots.

This Ain’t Your Granddad’s COPA

While the boot shares the same name as the OG Copa Mundial, the COPA 19.1 is built from the ground up with the most modern technology. adidas sought to bring forward the best of leather boots (comfortable fit, soft padded touch) with more modern features like a snug fit and reduced water absorption.

The ribbed one-piece K-leather upper forms the forefoot and most of the midfoot. It transitions smoothly to the knitted material around the ankle and heel area called “FUSIONSKIN”. While most leather boots have stitched uppers, the seamless nature of the COPA 19.1 means that less water can penetrate and get absorbed into the leather.

Expect the COPA 19.1 to stay light during wet weather conditions and for the upper to have a longer lifespan than most leather boots in the market due to reduced water damage.

adidas doesn’t skimp on the padding either. The pillowy soft sensation from the leather upper also makes an appearance in the form of foam pads just on the underside of your ankle bones for comfort and protection. The same pads are installed in the heel area of the insole to make the COPA 19.1 the most cushioned boot available by adidas today.

The COPA 19.1 is one of the sleekest boots on the market and marries its slim form with one of the softest, most pillowy leather uppers I’ve had on feet. But to ensure it keeps that slim shape, adidas installed a “burrito tongue” to reduce any bulk in the lace area and lock in your feet.

The burrito tongue’s elastic band didn’t stretch too much and it held my feet in a little too securely. I, however, had decent room for my toes and wiggling them felt like brushing myself against the softest of clouds.

To summarize: I had a secure heel lockdown, a very tight midfoot and the most pleasurable soft and free sensation around the toebox. It felt…. strange.

The tight lockdown around the midfoot never went away. It caused a lot of cramps within the first 10 minutes of my game and I had to loosen the laces to reduce any cramping that was developing as the game progressed. I was in major pain.

Pro tip: For those of you wearing these for the first time, I’d recommend switching into the COPA only midway through a game after your feet have been warmed up. Alternatively, if you don’t have a regular pair of boots to start you game in, loosen the laces a little and have a thorough warm up session in the COPA before jumping straight in to play.

After my first game in the COPA 19.1, I was afraid it would go down the route of the Nike Tiempo Legend 7 – a fit that was too tight and took forever to break in to. What’s the point of a leather boot if not a comfortable fit?

Giving the boots another try

Fortunately, the boots were much better on my second try. The midfoot was still securely locked down without any discomfort. I could finally feel the boots during the game. Although the upper looks extremely thick, the boot stretches out nicely when you put it on. This means that the upper thins out and your foot gets much closer to the ball without compromising on the dampened sensation.

The touch on the ball felt plush and exquisite. Passing, striking and receiving the ball was an absolute pleasure. You’ll start noticing creases appearing on the upper which shows how quickly the upper breaks in and softens up.

The dampening pods in the insole and the underside of the ankle did its job to make my feet feel at home. The boot finally fits like a sock and comes good on what adidas intended for it to do – be comfortable, fit snugly and provide an exquisite touch on the ball.

I was worried that the studs were too long on the COPA 19.1 but somehow, adidas manages to ensure they work just as well on firm ground and artificial ground. The moon shaped stud patterns were very similar to those on the Nemeziz 18.1 and they provide the same amount of traction as on the Nemeziz.

It’s got a good balance of traction and mobility from the bladed and rounded sides of each stud. It doesn’t stand out but it does its job well.

Despite teething problems, I’ve come to really love the COPA 19.1. Dare I say it, I like it more than the Predator 18.1 and the X18.1, two of my current favourites. The boot fits snugly. The pads keeps me comfortable and the leather upper is one of the best in the business, probably comparable to the Mizuno Made in Japan series. And while this is subjective, I think the design of the COPA 19.1 also grows on you.

The premium build quality is a plus. I like the transition of the leather and the FUSIONSKIN – it’s unlike anything I’ve seen in the market. Even the thermally bonded three stripes on the lateral side of the boot is made from a premium suede material.

I’m glad that adidas has made a serious return to producing leather boots. The COPA 19.1 is one of the best football boots in the market and a worthy contender for football boot of the year.

Could it also be the best leather boot in the market? Quite possibly so.

Final Thoughts
Once broken in, the adidas COPA 19.1 is one of the best leather boots in the game.
The Good
Plush leather upper
Fantastic touch on the ball
Comfortable fit
Secure lockdown
AG compatible studs
Great build quality
The Bad
Too tight on first wear
9
out of 10
Check below for the best prices
Prodirect SoccerSoccer.comLovell SoccerUnisport Store