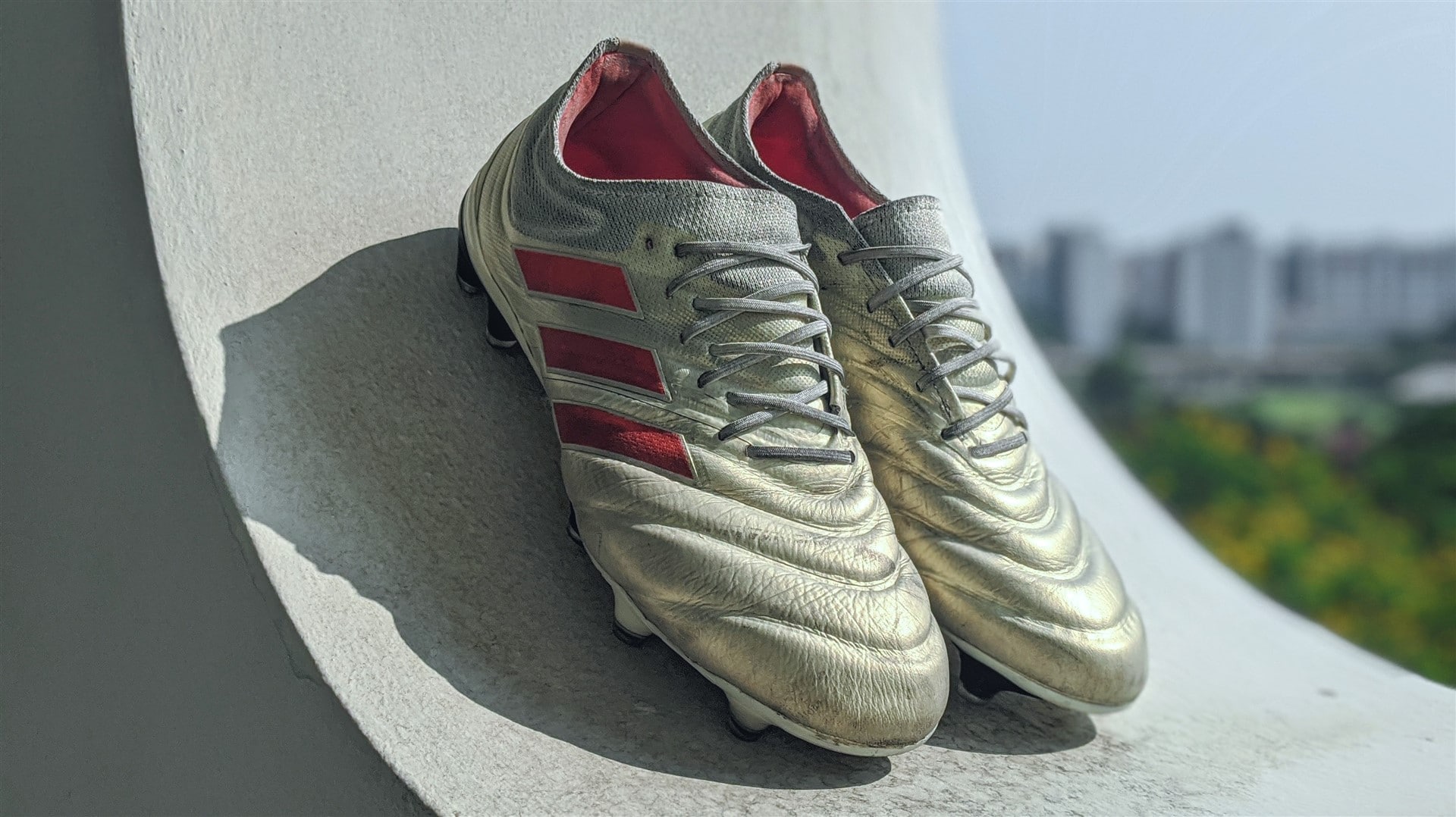 9
out of 10
Check below for the best prices
Prodirect SoccerSoccer.comLovell SoccerUnisport Store

Post hype reviews is a new series where we revisit some of our previously reviewed football boots and see if they hold up after months of wear. Do they over-stretch? Do they still give you blisters? How do they feel after continued use?

For the month of March, the football boot in our cross-hairs is none other than the adidas Copa 19.1. Launched in late 2018, it heralded adidas taking the leather boot category seriously with an innovative “FUSIONSKIN” construction – merging soft kangaroo leather with knitted materials to offer a football boot that’s plush and comfortable.

adidas has since launched a cosmetic update to the adidas Copa 19.1 in the form of the “Copa 20.1” though they have changed nothing in terms of its construction. For the purpose of our review, you can consider the adidas Copa 19.1 and the 20.1 to be the same boot that performs exactly alike.

What I first said about the adidas Copa 19.1

It’s been close to a year since I first wore a pair of Copa 19.1 for review. Out of the box, I loved how the launch colourway looked with its champagne gold finish and solar red stripes and interior. Despite seeing all the photos of the boot prior to the review, I was still taken aback by how thick, pillowy and soft the leather upper was when I got my hands on them.

In the age of “thinner is better”, it was refreshing to see adidas pad up the Copa 19.1. It is one of the most padded boots in market right now, though don’t be deceived by that thick upper. It stretches across your feet and “thins” out when you put it on.

Due to the burrito tongue, I do think it would be a challenge for people with wide feet to wear this. I’d say that the Copa fits perfectly for players with slim or medium width feet.

The touch on the ball felt exquisite, especially if you love a more cushioned feel on the ball. However, the ball always felt engaging and was never dull when I had the boots on. Touch was never compromised despite how pillowy the boots felt from all angles. Like I said previously, it was like wearing a pair of clouds to a match.

I’ve had the Copa for close to a year now and it’s been one of the regular boots in my rotation on days where I’m not testing new stuff. It’s seen a lot of action. It’s been caught in heavy rain at least twice and I can confirm that the Copa’s plush exterior soaks up water more than most boots out there. So if you’re someone who constantly plays in wet pitches, you might want to consider this as a factor when purchasing your boots.

Other than that, the Copa has served me excellently. The lockdown is still decent with the burrito tongue staying firm and not overstretching. The upper has also stayed taut thanks to the FUSIONKNIT construction so the fit was just as good as it was on Day 1. As you may see from the photos, the leather naturally softens up a lot more in the areas where I touch the ball, mostly around the instep of the right boot, but I don’t feel that it lost any of its softness in those areas.

Passing and receiving the ball remains just as comfortable, striking the ball feels effortless with the padded upper taking the sting away from your feet – all while still giving you a relatively tactile feel on the ball. It’s a snug fit so I do appreciate the padding keeping my toes well cushioned when braking suddenly where my toes are pushing hard against the tip of the boot’s interior.

Naturally, the Copa 19.1 has softened up over time but still remains in excellent shape unlike some leather boots that go sloppy and overstretch after regular use. After a year, the interior remains the most plush pair of boots I own.

The FG soleplate remains comfortable on FG and AG surfaces and despite how soft the upper feels, it never felt like coming apart or tearing. In fact, the padded feel gave me more confidence to dig deep into tackles and 50/50s. Durability hasn’t been a problem as well the FUSIONKNIT areas are pretty rugged on the outside and I’ve yet to see any splitting of the sole after much use.

Worthy of the Copa name

The original Copa Mundials were said to be timeless classics that worked in any situation. The Copa 19.1 lives up to that name – and then some.

The adidas Copa 19.1 has become my go-to “comfort boot”. It is a pair that would never fail me and it’s definitely the top of my list when I’m not feeling great going into the game. In fact, I donned the Copa when I was feeling flu-ish before a game. I ended the match with 4 goals and I’m not even a natural goalscorer myself.

I believe that the padded feel gives me a lot of confidence to do my basics well especially around assisting my first touch and keeping my passes ticking. The softness that I feel with every step also feels like a comforting blanket which constantly reminds me that “everything will be ok” during the game.

Everyone needs a pair of boots that can never do you wrong even when the chips are down. For me, the adidas Copa 19.1 is the chicken soup for my footballing soul.

Final Thoughts
The adidas Copa 19.1 is the ultimate comfort boot that will never fail you in any game.
The Good
Comfortable
Padded upper helps first touch
FG/AG compatible soleplate
Durable
The Bad
Soaks up water, heavy when wet
9
out of 10
Check below for the best prices
Prodirect SoccerSoccer.comLovell SoccerUnisport Store