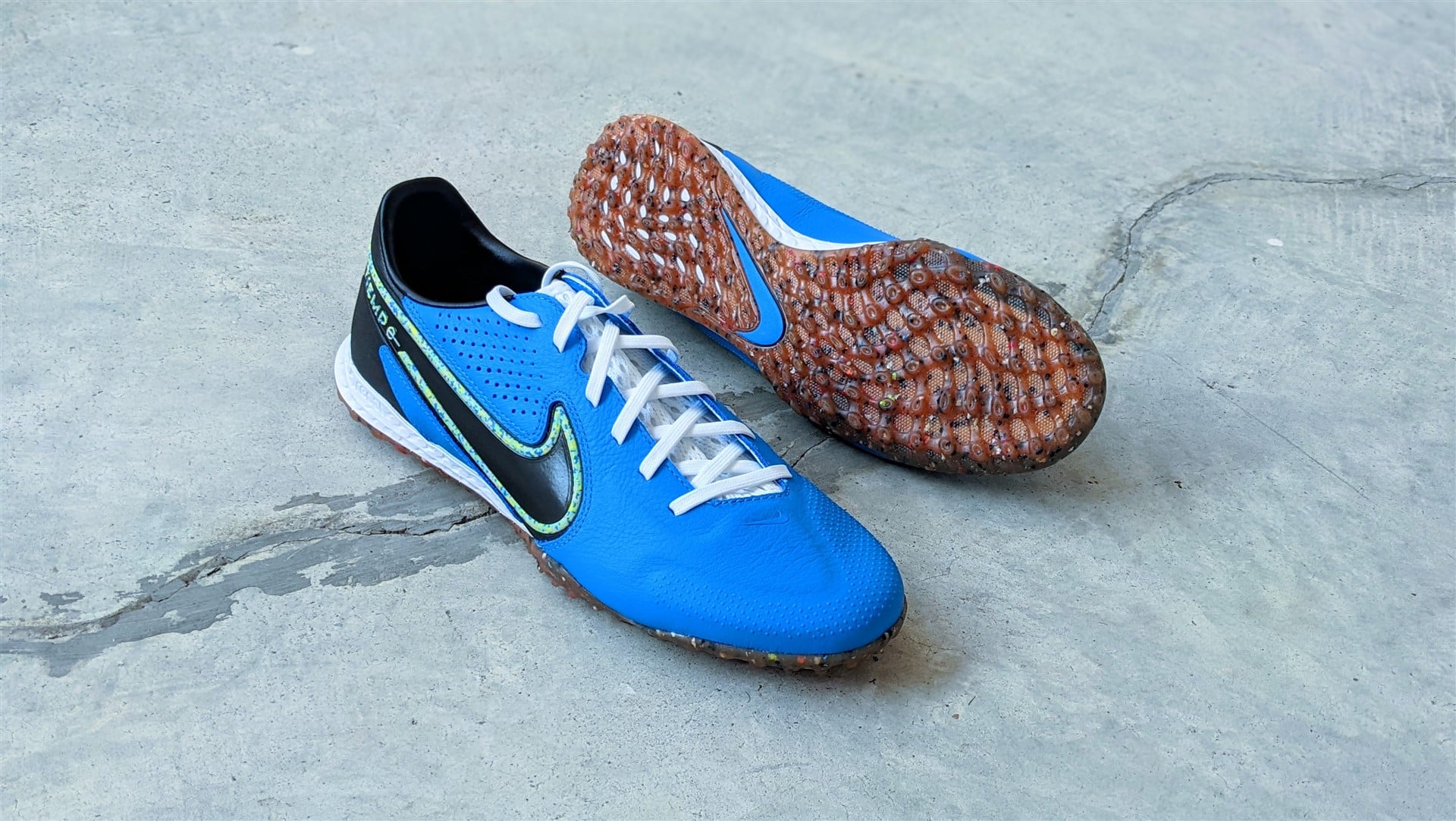 8.5
out of 10
Check out the best prices below
Tokyo FootballSoccer.comAmazonProdirect SoccerUnisport Store

The Nike Tiempo Legend 9 Elite can do very little wrong. It is one of the best Nike Tiempos in years due to its comfort and soft touch on the ball. It’s a pretty decent looking boot too amidst its simplicity. The AG variant has been one of my go-to’s for my games and it never disappoints. It is one of the best football boots available now – period.

I have been playing recently at The Cage (if you’re in Singapore and have never been there, where have you been?). The artificial pitch is rather shallow. Nothing wrong with that but with age catching up with me, I wanted to err on the side of caution when it comes to what goes under my foot. It’s all about avoiding injury in my 30s.

I’ve been on the hunt for a good pair of turf shoes, considering many of them are poor takedown models which can’t do my privileged feet justice. Enter the Nike Tiempo Legend 9 Pro TF. It’s not just a mouthful, but I think this is one of the best turf shoes around, built based off one of the best football boots available today.

What is the Nike Tiempo Legend 9 Pro TF?

Simply put, it is the Nike Tiempo Legend 9, built for turf. The biggest change of course is the sole. As a turf shoe, gone are the studs (or cleats if you’re of American persuasion) that cling deep into the grass. Turf shoes are often flatter for contact with flat, carpet-like artificial turf. For grip, the base is usually made up of many rugged nubs that help spread your weight across the carpet of turf while providing traction.

Nike’s approach with this sole is unique with a gum sole base that takes inspiration from their “Space Hippie” collection that creates soles from recycled materials. You’ll notice the small chunks of plastic and other materials in there alongside the main rubber piece.

The boot however is a “Pro” variant, just 1 level below the Elite models that we have reviewed. This reduces the price of the boot but would come with some minor compromises on the quality and feel of the shoe.

One of the reasons the Nike Tiempo Legend 9 Pro TF caught my eye was the inclusion of Nike React foam. I own a pair of Nike React Infinity Run shoes and they are just the loveliest running shoes. The foam is soft and light but also springy which makes walking and running in them feel enjoyable.

On the running shoes, the amount of foam used to build the sole is pretty large, forming a thick sole. It goes without saying that for you to feel the springy and cushioned sensation of the Nike React foam, you’d probably need a thick amount under your feet.

On the Nike Tiempo Legend 9 Pro TF, Nike experimented with including a relatively light amount of the Nike React foam in between the gum sole and the insole – stretching from the heel to the mid-foot area.

With the shoe a “Pro” model, I could feel the difference immediately in the quality of the leather upper. It is by no means bad, but the Elite model just had a plush and foamy sensation that the Pro lacks. It still feels comfortable and well worth the price (SG$159) but is devoid of the luxury the Elite’s leather upper provides. So do manage your expectations there.

It fits quite similarly to the Elites where you can go true to size but are also able to go half a size down if you’d like to have a snug feel. I went true to size as I was fine with a little toe room but I had to tighten my laces after 2-3 sessions after the leather stretched more than I expected.

The boot wraps around your feet comfortably and snugly and should fit most foot shapes. I would have preferred a more luxurious suede inner lining around the heel but we had to contend with a more waxy, plasticky lining instead.

Despite having only a light amount of Nike React foam included in the shoe, the spring effect was quite evident when I put it on and walked on the tarmac on route to the pitch.

It’s nowhere near as bouncy as its running shoes but the sensation was a pleasant surprise. The impact of the React foam won’t be as evident as you step onto that soft carpet of artificial grass but I appreciated the effort by Nike on that front.

Solid performance all round

The shoe is what you’d expect from one that carries the Tiempo name. The leather upper does its job without much fuss or fanfare. It provides the basic cushioning when it comes to making contact with the ball. As I previously mentioned, it’s not a luxurious feel, but is decent enough to make you feel comfortable passing and receiving the ball in your small sided games.

Whether it’s a touch on the outer foot or inner foot, the sensation feels consistent across your entire forefoot and midfoot.

The lacing and the fit also kept my foot stable and secure as I pivoted and turned during my small sided game on the shallow turf.

The biggest compliment I can give that turf gum sole is that I never had to worry about traction or twisting my knee/ankle while playing at a fast pace. The small nubs made changes in direction possible without slipping nor digging too deep into the ground. You won’t be getting classic Mercurial traction but on a shallow turf ground, that is the last thing you need.

Like most turf shoes, the sole gives you a piece of mind from injuring yourself through a lodged stud because these studs are so short.

I did wish that I could have felt the Nike React foam a little more during my gameplay because playing on the soft turf, any of its impact was blunted. Though, I have to say I constantly felt comfortable and was free from aches and cramps in the Nike Tiempo Legend 9 Pro TF. Perhaps that was the React foam working in the shadows.

The Nike Tiempo Legend 9 Pro TF does everything you expect from a turf shoe. The sole is turf friendly – gentle on your feet and joints while providing sufficient traction. The fit is snug but comfortable and despite the upper being a “Pro” variant, this is still more premium than most turf shoes which are further down the takedown chain.

The leather is soft and comfortable and should appease most regular players save for the high-browed leather connoisseurs who only can accept Mizuno’s Made in Japan quality leather.

It’s a shame that the Nike React foam feels like a gimmick as the cushioning properties feel a bit redundant when the surface you’re playing on is soft too. Any of the springy sensation you feel would be minimal. However, the best implementation of the foam could be found on the indoor court variant so if you play on a hard court, do give that a go.

Still, the Nike Tiempo Legend 9 Pro TF still justifies its price tag of SG$159 thanks to its all round comfort, looks and quality. Most takedown turf shoes can range from SG$80-100 but if you’re willing to splurge just a bit more, give the Tiempo a try.

Who is this for?
Players who want to avoid injury playing on artificial turf.
The Good
Premium quality sole
Sufficient traction on turf
Not clingy on turf
Soft leather
Fits most foot shapes
The Bad
Can't feel React foam on turf
Leather stretches more than Elite model
8.5
out of 10
Check out the best prices below
Tokyo FootballSoccer.comAmazonProdirect SoccerUnisport Store