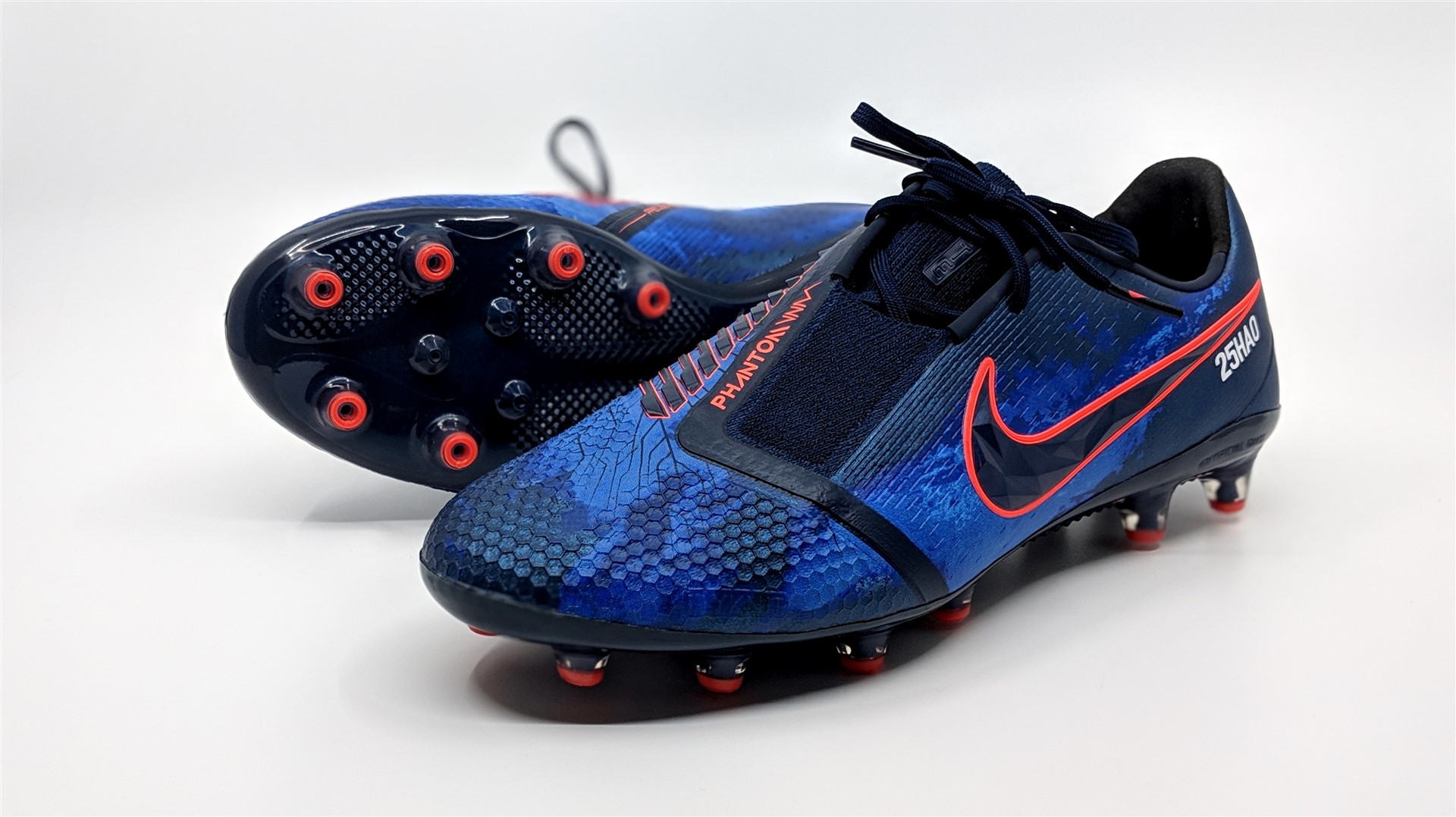 9
out of 10
Shop Nike PhantomVNM below
Prodirect SoccerSoccer.comLovell SoccerUnisport Store

Does the PhantomVNM spell a new era for power boots?

In May 2013, Nike changed the game for ‘power boots’. After 6 years of the T90 Laser series, Nike retired the concept of power boots, and refocused strikers on a 1-to-1 barefoot touch with the ball that relied more on your striking technique than the use corrective technology. The glory days of bulky boots with thick elements were over and in came sleek, modern, lightweight boots.

This makes the PhantomVNM an extraordinarily intriguing proposition with the reintroduction of the shooting element from power boots of yesteryear. The Nike Hypervenom Phantom 3 had poron pads in the ‘sweet spot’, but those served more to take the edge off shooting and still depended on your own shooting technique.

Is the PhantomVNM Nike’s way of admitting they were wrong to kill off the T90 Laser line? Are power boots making a comeback? Well.. not exactly.

My relationship with the PhantomVNM didn’t kick off on the right note. Like the Hypervenom Phantom 3, the PhantomVNM is made with a full Flyknit upper, but the NikeSkin covering the entire upper made it seem more like a synthetic material than knit.  Unlike the Nike PhantomVSN, the upper felt plasticky, with its honeycomb texture bringing little to the table apart from added stiffness.

Picking up from where the PhantomVSN left off, the PhantomVNM partially covers the lacing system with Flyknit, which Nike claims increases the strikezone by 30%. Flywire, a personal favourite of mine, also makes a comeback to ensure maximum lockdown of your foot.

And of course, there’s that strange looking strike zone which Nike calls the “Precision Pwr” strike zone. When leaked images of the boot first hit our screens, I’d assumed that it was a new take on the curve elements made famous by the adidas Predator series. Instead, it echoes another power boot – the Mizuno Wave Ignitus and its mukaiten panel which was designed to help you hit those knuckleballs. 13 ridges help to correct the angle that you hit the ball, enabling you to hit one of those satisfying top spin shots that dip.

Or so Nike claim.

Let’s start with the show stopper – that Precision Pwr strike element. It shouldn’t come as a surprise to know that it doesn’t quite live up to Nike’s lofty claims. In fact, I’m not sure it really adds anything to the shooting game, unlike the Predator Elements which did legitimately add some swerve.

What the Precision Pwr does is to help you visualise how to hit the ball. It acts as an indicator of the sweet spot on your foot, ensuring the most efficient transfer of power from foot to ball. As anyone who’s ever hit a knuckleball knows, the most important part of the technique is where you strike the ball, and that’s outside the Precision Pwr’s area of expertise. But shooting in the PhantomVNM’s feel super punchy and true, which should satisfy all you trigger happy strikers out there.

Unfortunately, the plasticky upper came back to haunt me, giving me a solid blister on my left toe which is almost unheard of in this modern era of knit boots. It took around 2 training sessions for my feet to get used to the boot, which was slightly disappointing for a $300 boot.

The honeycomb texture also left a lot to be desired, as it lacked that same grippiness that I loved from the PhantomVSN, although it did help with traction when playing in wet conditions. #longliveACC

A Broken In VNM

Once broken in though, the boot felt really awesome and I can see why so many players, who aren’t strikers, have switched to the boot. It feels like the Nike Mercurial Vapor 11 with a striking element. The PhantomVNM is lightweight, with an upper that is just right in terms of its thickness, yet punchy and solid when you need to hit those longer passes or strike the ball.

The Flywire and Flyknit construction work in tandem to give you superb lockdown, without feeling overly tight. That lockdown is further complemented by the heel construction where Nike have retained the heel padding from the Hypervenom 3 to hold the ankle in place. They’ve also, very cleverly, added in a strip of synthetic suede to give you the best of both worlds. The suede liner is large enough to provide extra friction for lockdown, without becoming a potential durability issue when it dries up over time, like it does on some of the Japanese boots like the Mizuno Morelia Neo 2. Huge thumbs up from me.

The PhantomVNM also comes with a new HyperReactive plate that does away with conical studs in favour of a full set of chevron studs. The difference in implementation means that unlike the Nike Mercurial Superfly which facilitates straight line sprints, the flex of the soleplate allows for more multi-directional changes of direction.

If you play on artificial surfaces though, the chevron studs exert way too much bite and grip for me to condone using them. Go with the AG-Pro versions like we did for the sake of your knees and ankles.

So… Is This The Rise Of Power Boots?

Without getting too philosophical, it really depends on how you define ‘power boots’. If we look at it as the old school padded and weighty boots like the Predator remakes or the T90 Lasers, I’m afraid that we’re never going to see those make a comeback sans nostalgic remakes.

What seems to have happened, is that we’ve taken the best of both worlds, combining corrective accuracy technology with a streamlined silhouette for a closer ball feel. A sleek, form fitting boot with just enough of a strike-zone to add some oomph to your shots.

A new era of power boots is potentially upon us and I can’t wait to see how this works out for the industry.

Nike PhantomVNM Review: Shoot with some oompph
Final Thoughts
The Nike PhantomVNM is an exciting evolution from the Hypervenom Phantom series signifying Nike's intent to give you the best strike.
The Good
Precision Pwr adds punch and oomph to shots
Good lockdown
Lightweight
The Bad
Upper requires some break in time
FG studs are too aggressive for AG
Boot feels a little too plasticky
9
out of 10
Shop Nike PhantomVNM below
Prodirect SoccerSoccer.comLovell SoccerUnisport Store