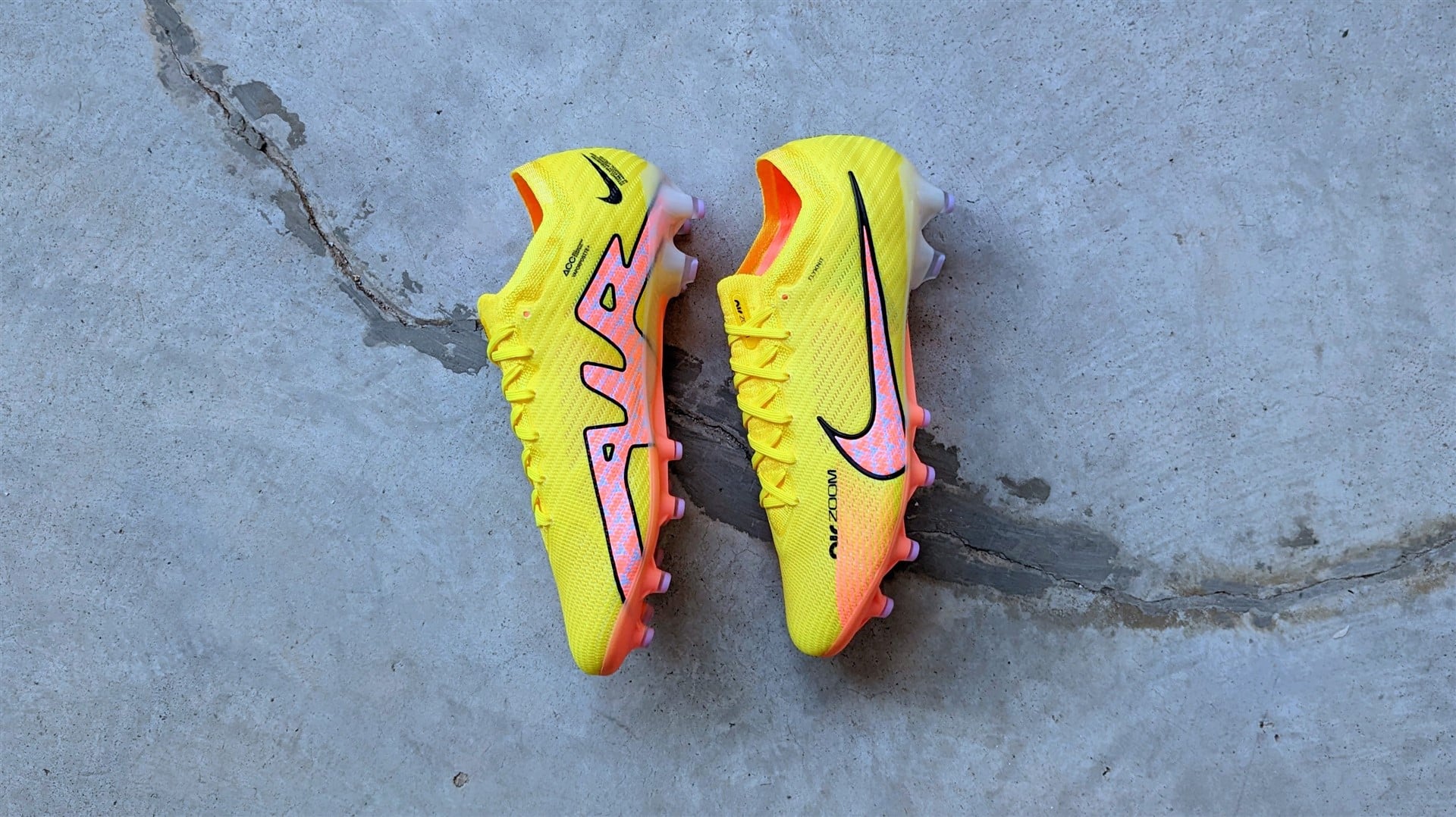 Air Zoom technology works well, but not where you expect.

The Nike Mercurial is easily the most successful football boot brand/silo in the history of football boots. It conveys beauty, speed and innovation that has made it the most in-demand football boot in the world. The fastest, most explosive forwards have worn them and now, it’s worn by every player in every position – even by the goalkeepers.

However, while the Mercurial brand has continued to be successful, Nike has toned down its marketing to tamper expectations for each new generation of the Mercurial.

The Nike Mercurial Vapor 12 to 14 have essentially carried the same look and shape with the only big change being an update on its uppers. I have loved them all but a part of me yearned for something fresh.

The latest model, the Nike Air Zoom Mercurial Vapor 15, first brought a tinge of disappointment when I laid my eyes on it. It’s the exact same boot, I thought. But this time, the changes were all under the hood.

We first got a glimpse of Nike’s attempt to incorporate the Air Zoom technology in 2020. Many expected it to launch with the Mercurial Vapor 14 but we had to wait a couple more years for the concept to come to fruition.

The idea behind Nike’s Air Zoom technology across all of their shoes is to provide cushioned comfort and a bouncy, spring sensation when walking in them. With the Mercurial line, the intended application was more aggressive.

Nike sought to have Air Zoom provide that springy effect within the sole of the Mercurial that makes you feel propelled when running – an essential feature in speed boots. They’ve done it by inserting air pods in the forefoot area of the Nike Air Zoom Mercurial Vapor 15’s tooling and fascinatingly enough, the air concept is also featured within the upper material to ensure that the entire forefoot is surrounded by air.

Of course, Nike doesn’t hesitate to remind everyone of the Air Zoom tech as they have the label plastered everywhere from the lateral side of the forefoot to the instep, tip of the tongue to the insole. Air is back, and don’t you forget it.

It is a very handsome boot but did we need the words “AIR” plastered across the instep? Less is more, Nike.

Putting on the Nike Air Zoom Mercurial Vapor 15 was a breeze. The upper is softer than ever and the knitted material across the lace area is stretchy to accommodate feet widths from narrow to moderately wide.

The cut of the boot is also the roomiest among Mercurials I’ve worn. I went true to size in my US 9.5. I noticed a slight bit of space around the heel and the toebox. I could live with the space but those who want a true and tight fit might be disappointed. Going half a size down might just make it too tight so it lives in nowhere land when it comes to sizing. Keep in mind that I was wearing the artificial ground (AG) variant which may have slight differences in fit.

I’d suggest going true to size just to be safe and be content with the space.

Once I laced up and took my first steps in the boots, four things stood out.

I loved the anatomical soleplate in the previous models but it was less and less pronounced with each new Mercurial iteration. They made way in the latest model to accommodate the air zoom pods in the forefoot, which elevates that part of the insole. The bouncy sensation was evident especially when I walked on a harder surface though was less evident, understandably, as I stepped on the turf.

Wiggle your toes and you’ll also notice a padded but airy sensation around your toes. That’s right, Nike also inserted small air bubbles into the upper around the forefoot to give you a subtle but unique airy sensation that only Air Zoom technology can provide.

The Nike Air Zoom Mercurial Vapor 15 performs like how you’d expect a Mercurial to and again, it improves on past iterations, in small ways.

I thought with this slightly more plasticky upper, it would feel stiffer than the Vapor 14. I was wrong. The Vapor 15 is thinner and also softer and it breaks in almost immediately. That toebox softens up very quickly and that gets you close to the ball for those rapid dribbles. That midfoot also softens up comfortably but it’s in that toebox where the synthetic upper goes buttery soft.

The “air” pockets across the upper also do its job in taking the sting out of hard strikes which is a nice touch but don’t expect to be protected from tackles. It will still hurt in a clash.

We can’t discuss the Mercurial 15 without talking about lockdown. It is very good for the most part. You’ll notice a cage-like structure all across the midfoot (very obvious against sunlight) and it does a marvellous job of keeping your feet planted into the boot no matter how aggressive you move laterally. The aforementioned tightness around the instep initially concerned me due to my flat footedness but it also eased up within minutes without compromising the fit.

I still did notice the small space around the heel slippage and the space around the toebox from time to time. It didn’t affect my performance but it did annoy me a little that a Mercurial should be providing more lockdown, especially around that heel.

To be honest, I do feel that the “air” features in the soleplate feels overrated. It doesn’t provide that snappy feel nor do you really feel like bouncing on the balls of your feet once you get into the zone. It doesn’t affect me in-game but in hindsight, the feature does feel gimmicky. I just wished it felt more pronounced.

What I really would like to talk about is the artificial ground (AG) soleplate we tested. The Vapor 14 brought about a major revamp in the design which made it more functional on AG for guys with creaking knees like me. However, it looked horrible and cheap.

With the Nike Air Zoom Mercurial Vapor 15, they have gone back a generation by designing a structure which looked more the ones that featured on the Vapor 13 and the other Nike boots that came before. It looks better but reverts to a more aggressive design with less studs and a return to having 2 bladed studs at the back.

It hasn’t brought me any discomfort and works well and safely for AG through my playtests. Pivoting is easy, the studs dislodge properly and those 2 blades do give you some bite when accelerating and decelerating.

However, I’d still have prefered the studs to have been shorter, in greater numbers and to have been fully conical to further limit chances of injury – but that’s just me, a 36 year old amateur player who wants to play as safe as I could.

We’ve also noticed that in the few months preceding this article, we haven’t been able to buy any Nike products on our partners like Prodirect Soccer or Unisport Store. Nike has set up sale restrictions for all retailers to only sell within the region they operate, even if they ship overseas.

This means a Singapore-based customer like me won’t be able to buy from Prodirect Soccer as they’re limited to only selling in the UK and EU. AG variants are very challenging to come by to begin with, let alone its availability with sale restrictions.

If you’re facing availability issues, give our friend Tokyo Football a try. He is based in Singapore but delivers worldwide. Link’s at the end of the review.

2 years ago I was pumped to experience Nike’s Air Zoom Mercurial concept mainly for that soleplate. I do feel a little underwhelmed by the gimmick but its subtle application of Air Zoom in the upper has pleasantly surprised me.

The soft synthetic upper has grown on me and its softness means I don’t get bruised toes the way I do with the previous few models of the Mercurial. The cage within that upper’s midfoot is also exceptional in keeping my feet locked without that trusty anatomical soleplate.

Shame they couldn’t get the full points for lockdown due to that space around the heel.

Overall, it has been a decent showing for Nike’s first Air Zoom Mercurial. The Nike Air Zoom Mercurial Vapor 15 is not perfect with that fit and the gimmicky sole but the midfoot lockdown and lovely upper does make up for it. The Mercurial is more comfortable than before and that could only be a good thing.

There’s room for improvement and the Vapor 15 is a good platform to be a springboard for greater things – even if that springboard is made from air.